It was the day after the exhibition of Jim Herbert’s new paintings at English Kills.

Noon. I was waiting outside the gallery.

I was guessing that maybe I should have checked the schedule for the opening time. And not regretting it since it was one of the first beautiful days in Brooklyn in a while.

A long, bearded figure came down Forrest Street from Flushing Avenue. He was wearing a denim jacket and mirrored shades. It looked like someone I knew.

I wasn’t going to call out and shatter this peaceful anonymity between us. We were the only ones on the street. Even the corner with all the cop cars was quiet. 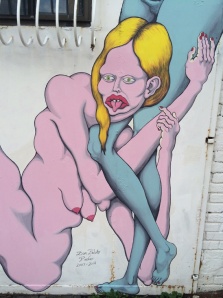 DPP was about to start breakfast. A hero sandwich of some kind.

The walls were still painted pink inside the garage from its tenure as his studio. He was painting a pink woman on the outside wall. She was intertwined with a long legged greenish man who was balding and sporting an erection.

“I’m going to paint a face on this lady’s butt.” Gesturing outside where the mural was in progress. “It’s the first nice day for painting since I started adding on to the piece.” When did you start working on it? “I guess in 2009. When I first painted it there was a wheat-pasted baby just beneath the guys fingers. So it looked like he was reaching for the baby.” 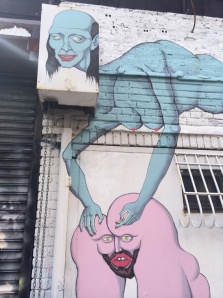 I sat down on one of the wooden benches in the garage. Behind me were a stack of paintings from the English Kills 7th Anniversary Show.

He devoured the sandwich – Not to sound like a boy crying wolf but heroes are put on notice here.

He would eventually sign the wall: “Don Pablo Pedro 2007-2014” in black cursive. I looked at the things he brought: paint, deli quarts, brushes, food, water.

He had turned his attention to a peach now, casually and thoughtfully gnawing around the pit. He turned his mirrored shades to the street. In profile he looked ready for a hike – flannel shirt, mesh hat, bearded and lean.

“Do you mind if I hang out and write?” I said, pulling out a blue composition notebook and sitting on a wooden bench.

He stood and went to the street. He put a bag on the ground and took one last bite off of the pit before throwing it to the sidewalk too. He came back in and emptied a viscous red paint into a deli quart. With this he went onto the sidewalk and began to paint.

First there was a loud bang across the street. The sound is the alley entrance to English Kills opening. Chris Harding appears in a soccer shirt. His head is down and he is taking something in a garbage bag down the sidewalk. He moves quickly and is gone.

When he appears again a few minutes later through the same door he calls across the street.

There is a face going into the Y where the pink woman’s thighs meet her pubic area. The face is just an outline in red right now. Kind of a toothy self-portrait from a time when DPP’s beard didn’t hang quite so low. 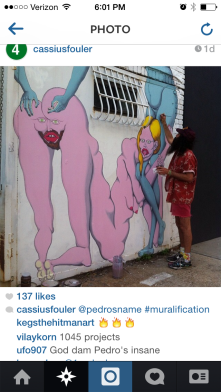 I could hear someone talking to DPP. “Can I take a picture?” it was a man asking. “You just captured my entire sex life.”

I turn around to see a man hold up an iPhone. He has a girlfriend or a wife with him, who must have been equally excited to see her recent sex life in a mural, because she also took out an iPhone and pointed it around.

They start asking him about other places to see murals. They want to see wild style… “Halsey” – “Jefferson” – the sidestreet beside the old “Factory Fresh.” A police cruiser rolled by. The mural-seekers were starting to move on.

“Vil is supposed to start hanging the show soon.” Harding says to me.

Pedro steps back and starts rolling his head from side to side. The way that people tell you to do when you are supposed to loosen up a little. He dips the brush in some water and then into the red paint again. Her buttface is getting eyes and hairy outlines on the brow and chin – the taint and clitoris.

I join Harding in walking back once again to the other side of the street. Now I’m going to see JH’s new work. Walking in, for the uninitiated, is to enter two rooms filled with enormous canvases of figures a la Monet engaged in pornography’s vision of sex.

I look up at these enormous paintings and wonder, if they invoke a longing to recall my old sex and self – at 1/4 of century. How does this painter feel at 3/4 of a century?

Speak to JH and you immediately sense his energy. Balled up in a physically fit old dude it practically comes flying out of him when he’s talking. His eye movements are keen – they are observing.

I walk around the gallery and decide that I don’t know anything. But it’s powerful.

In the alley outside the show rooms Harding is sitting in the shade. Rolling endless cigarettes and cracking beers from last night that are floating around in water. I sit and join him in the cigarette rolling and beer cracking.

The door is opened and sort of frames DPP in a small world. He’s almost laying on the ground now. Outlining her feet and double-jointed abdomen in black. 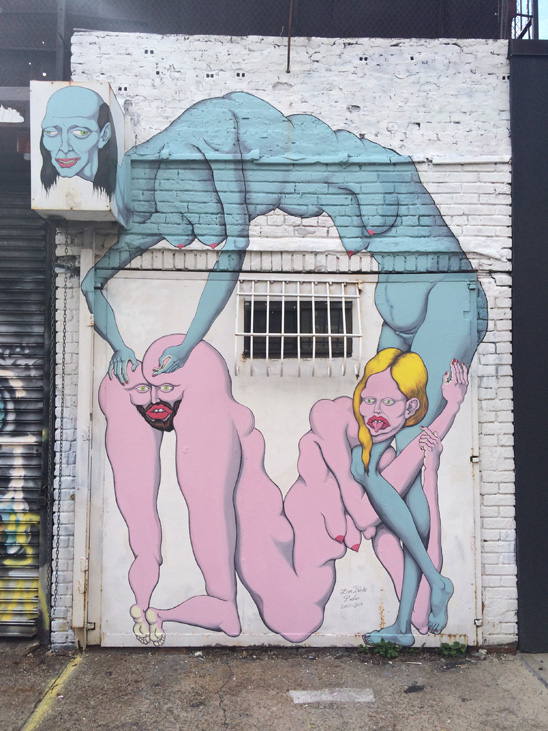 The small, framed world looks like one in which a hairy, alien Pablo Picasso ate baby Keith Haring and does frescoes on the streets in baby blood.

DPP has a communion with paint. In this shared malleable weirdness he seems at peace.

Suddenly Frankie the dog appears. Frankie can’t be trusted anymore. At least that’s what Harding tells him while blocking him from the street. But he picks the little lhasa apso up and takes him along to the garage.

DPP steps back and gazes at the painting. “Buttface.” he says and walks away. He takes a sip from a Tecate.

Harding puts Frankie on a retractable leash. “Can you hold this while I move some things into the gallery?” I put the leash on my key clip hanging from a belt loop.

DPP has begun to add a shocking outline to her eyes. She’s become an Egyptian in the stunning quality and quantity of eyeliner and cheek shading. A Sphinx or a Cleopatra sitting in the sun on the last spring day of May.

A young lady and her mother arrive. The young lady is wearing a spring dress. She wants to sit with her father and Frankie. She spots the painter across the street.

“I want to see Pedro!” she says. When she gets to him she asks her mother, “Do you think he is painting good?”

She is getting antsy and wants to run around a little with Frankie. Chalk appears and she begins drawing on the sidewalk.